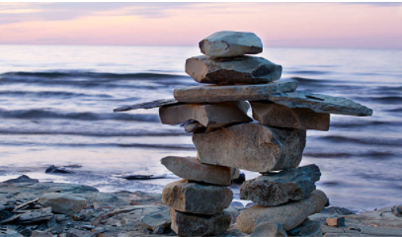 Inuksuk. It is a structure made of stones piled on top of each other to form what appears to be a gate or the shape of a person. The word is from people indigenous to the Earth’s Arctic regions (Inuit,  Iñupiat, Kalaallit, Yupik, et al).  The plural is inuksuit.

“The term inuksuk (the singular of inuksuit) means “to act in the capacity of a human.” It is an extension of inuk, human being. In addition to their earthly functions, certain inuksuk-like figures had spiritual connotations, and were objects of veneration, often marking the threshold of the spiritual landscape of the Inummariit, which means “the people who knew how to survive on the land living in a traditional way.”

“They were once revered as materialized forms of power. They weren’t symbols of power, they were loci of power. Some were never to be approached, and to this day are carefully avoided. Others were regarded as sources of good fortune, cures, and protection, and so were venerated, touched, and given offerings.”   – https://www.historymuseum.ca/cmc/exhibitions/archeo/inuksuit/inukinte.html

Inuksuk are usually made with materials found in place. Most Inuksuk were made by several people and, like other monoliths (e.g., Stonehenge), it is difficult to see how they could have been made without machinery.

There are some inuksuk, though, made by one person — small and personal. You can do this as well. It’s an ideal representation of Crossing the Threshold of your Hero’s Journey.

Start out by setting the intention to build an inuksuk to represent your gateway into a Hero’s Journey.

Build it where you can see it easily and frequently.

Create a simple three stone inuksuk:  two relatively equal sides with another balanced across them to form what looks like a doorway.

Respect the value of the stones you use.  They are old and have seen much.

Balancing the rocks is a key part of the inuksuk.

Once completed visualize moving through the inuksuk.