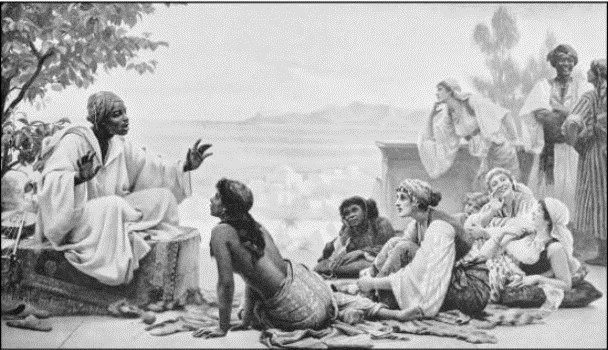 In our age of obsessive documentation of the quotidian, it’s mind-boggling to remember that most of what we think of as hero stories (myths) were not written down for thousands of years.  They still exist because they were all re-told orally. Some were told around a fire in the evening.  Some were re-told at festivals, death rites, or wedding feasts.  Some were told by traveling singers or poets.  Some, I’m sure, were used by a mother to a misbehaving child in an attempt to scare her back into line. “You know what happened when the beautiful Princess Aurora went off into the forest alone, eh?  She pricked her finger on a brier and slept for a thousand years.  Do you want that to happen to you, eh?”

A Hero’s Journey requires your story be told.  If you don’t pass along what your trials and ordeal were like and what you’ve learned, it’s just a cool experience for you, but it’s not a Hero’s Journey. The last stage of the Journey is Returning to the Village with the Magic, in which you bring your story and experience to others.

Don’t think you have a story worth telling?  You do.

Think about a story most everyone knows;  The Trojan War. My college copy of the Iliad of Homer is 496 pages and there is no real success, even at the end.  Every page is fighting and death and loss and pain, with a meddling god added for measure.  The last line is “Such was their burial of Hektor, breaker of horses.”  The pain IS the story, and why it had been retold since ~12 BC.

You have survived your trials.  You got through your ordeal (however you did it).  Now is the time to finish your Journey by telling your story.  Tell your story to at least one person this week.

You must be the storyteller of your own story.